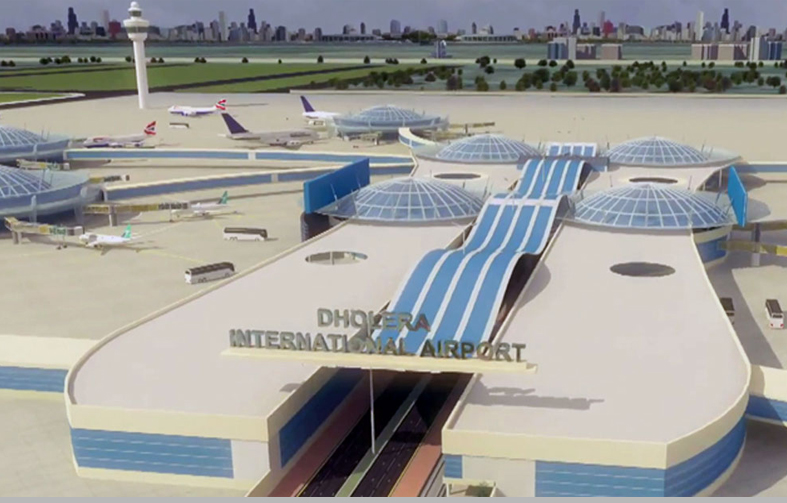 An enormous sum of Rs. 1,000 crore has been set aside for Dholera airport by the Modi government as per a recent report.

The ancient port city located near the Gulf of Khambat shall soon be seen exhibiting a massive international airport. Dholera, situated in the state of Gujarat is the first smart city to be developed under the 100 smart city vision of NDA government. It is spread over 920 square kilometers and is anticipated to be six times larger than Shanghai in size, an ambitious project indeed. Shanghai is spread over 6,340.5 square meters of municipal area and it is yet to be understood how such proportions shall be reached.

The trunk infrastructure construction in Dholera has received a formal nod from the state and central government and an amount of Rs. 3,000 crore has been allocated by central government to develop this project. State government has made the requisite land available for the activation area of 22 kilometers on which the trunk infrastructure is being built. This shall include high rise shining towers, clean and green ecosystem, power, gas and water supply, andunderground facilities such as water treatment plant and proper sewerage system amongst few others.

The phase 1 of the project is expected to get completed by the year 2019 while the rest of the project shall follow in parts and should get completed in a longer span of time by 2040. Government is leaving no stone unturned to deliver the facilities and quality of life to its residents as envisaged by Mr. Modi. The creation of Dholera international airport is a step taken towards the same.

Dholera airport shall be built over 1,426 hectares of land and as per the blueprint; it shall consist of two huge runways. One runway shall measure 2,900 meters while the other shall be 4,000 meters long. As per Chavda, it shall only take another five years for Ahmedabad airport to get fully saturated and traffic needs to be diverted to some other airport within the region. Dholera International airport shall therefore act like an extension to the Ahmedabad airport and the project seems to be viable owing to its proximity to Ahmedabad which is 80 kilometers approximately.

It is anticipated that Dholera airport shall takeover the position of World’s number one Dubai airport, a difficult vision to achieve in current times. This is based on the theory that the flight connecting Heathrow and Singapore via Dholera shall travel 322 kilometers lesser as compared to the flight that shall go through Dubai. This shall save both cost and time making Dholera the preferred hub for travelers.

An enthusiastic project with tough deadline and ambitious vision has been laid down by the government. Hopefully the aspiring Modi government shall pull it off as expected.